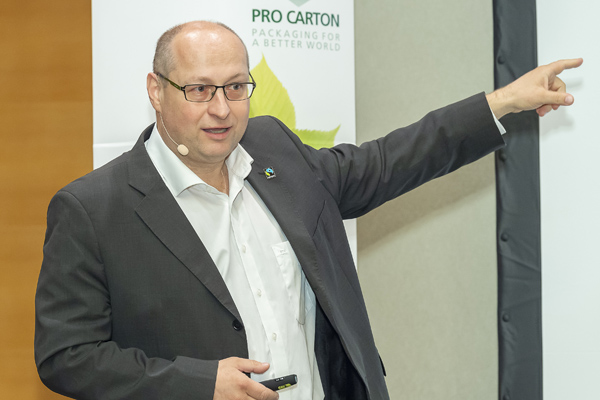 At the Pro Carton/PROPAK Austria Marketing Event in October 2018, Fairtrade Austria’s Managing Director Hartwig Kirner made it clear that the recycling economy of the future has already begun and that success is no longer conceivable without sustainable products. Fairtrade sold $8.49 billion worth of goods worldwide in 2017. In 2017 alone, sales increased by 8 per cent. The movement began in 1988 in the Netherlands. Today, Fairtrade International cooperates with 1.6 million farmers in 75 countries. Hartwig Kirner hails from the branded goods industry and over the past 11 years has made Fairtrade one of the most important brands in Austria.

"Contrary to popular opinion, the world has developed very positively in recent years: There is less poverty, 80 per cent of people can now read and write, and in Bangladesh the birth rate per woman has fallen to 2.3 children. Nevertheless, most people worldwide believe that the world has been getting worse in recent years, especially in Europe." "A lot of people think things used to be better, but that's not true. Poverty here was also far more widespread than today, a two-room apartment for seven or eight people was not uncommon, and most people had to work very hard physically in agriculture. One often hears: nothing seems to work, the world is getting worse and worse. But the reality is completely different. If you work to make the world a better place, it gets a better place. That means: do-gooders are realists!" Fairtrade has set itself the goal of improving the situation of small farming families in Latin America, Africa and Asia. "It's not about charity, but about fairly rewarding the people who make products for us. We have three pillars of sustainability in our retail portfolios: regionality, organic farming and fair trade".

The trust of consumers

"Today, 62 per cent of people say they seek support in life. Confidence in the established institutions has declined. This is why sustainability is becoming increasingly important. There is a great longing for honest, pure products. The sales development of Fairtrade products was already very positive at the beginning of our millennium, but growth has virtually exploded since the economic crisis. Over the past five to seven years, the topic of sustainability has gained enormous momentum." 79 per cent of consumers trust the Fairtrade brand. "It is important that we do not stand still, but continue to develop forward. There must never be even a hint of suspicion that something is not right. Particularly if you are well positioned as an industry when it comes to sustainability, you have to work hard on the subject." Surveys show that people increasingly want to buy Fairtrade products. "Almost three-quarters of people say they want to buy Fairtrade products. I know that this is wishful thinking, but it shows that this trend is gaining in importance in society. In Austria, the Fairtrade brand is now one of the top 25."

Making the most of opportunities

"You can't say it often enough, sustainability is an extremely hot topic. The food business is currently a real driver here and is taking many initiatives. This is no longer greenwashing, these are real efforts, because the trade understands its consumers best and knows what they want. The issue of sustainability has reached the core of society. The subject of plastics has become one of the biggest megatrends in society: the opportunity of positioning cartonboard against plastic is greater than ever." "But I would warn against preaching with a warning index finger. Consumers do not appreciate this. We at Fairtrade stopped doing this many years ago. Always just pointing to the problems frustrates people. They want to have a positive image, and at Fairtrade we also see that we are being listened to much more when we focus on the positive aspects of a sustainability strategy. The cartonboard and carton industry must show what its products can do. The time has come for cartonboard, but this opportunity must also be used to strengthen ecology." "When I look at how the world has changed for the better in recent years, I am proud to see at this event how the topic of packaging is being discussed on an excellent platform and how positive solutions are being worked on. I am delighted that the cartonboard and carton industry is really taking sustainability seriously."
https://www.procarton.com/wp-content/uploads/2021/02/05-024-Hartwig-Kirner-home.jpg 400 600 esterling@admin https://www.procarton.com/wp-content/uploads/2021/12/logo-232.png esterling@admin2018-12-04 00:00:002021-11-05 18:08:43Sustainability – a concept from yesterday or for tomorrow?