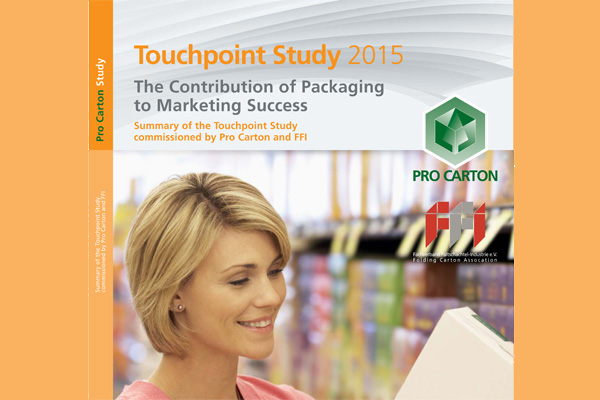 To determine the equivalent value of these touchpoints, for comparison purposes the researchers took a typical media plan and used the average price per thousand contacts (PTC) of two media: billboards (EUR 6.52 PTC) for pure visual contacts and print (EUR 20.85 PTC) for tactile contacts. For example, a carton in the cereal product group generated a user pattern with an average of 45 touchpoints: it is seen 32 times (visual contacts) and handled 13 times by hand (tactile contacts). If, for example, 10 million packs are sold in this product group, we arrive at an impressive media equivalent of EUR 4.8 million, comparable to a small advertising campaign. The numbers tend to vary: on average, chocolate bars achieve just as many pure visual contacts as tactile contacts in the store. In contrast, tea is handled far more often: two visual contacts per quarter versus an average of more than five tactile contacts. In-home, tea packaging achieves a total of 78.6 touchpoints – 61.4 pure visual contacts and an additional 17.2 tactile contacts. The number of touchpoints - and thus the media equivalence value - increases in particular for products which are kept longer in the household. This gives those responsible in marketing yet another reason for regarding and using packaging - in particular cartons - even more as an advertising medium in their communication mix. Pro Carton President Roland Rex: "For the first time, this study shows that cartons and their contact numbers are one of the most important and far-reaching advertising channels in total, both at the Point of Sale as well as in-home. Our last marketing study, "Multichannel Packaging", compared 23 media and demonstrated the significance of cartons for marketing." DOWNLOAD AND ORDER NOW! >> "Touchpoint Study“ >> "Packaging: A medium with considerable power“ Printed version in English and more information from Pro Carton Suzanne McEwen mcewen@procarton.com www.procarton.com
https://www.procarton.com/wp-content/uploads/2021/02/touchpoint_cov_home.jpg 400 600 esterling@admin https://www.procarton.com/wp-content/uploads/2021/12/logo-232.png esterling@admin2016-01-29 00:00:002021-11-07 16:00:04Packaging provides billions of effective advertising contacts