Simple and credible regulations on sorting and recycling are key to secure consumer understanding of recycling and packaging materials, according to a host of experts invited to participate in an EU Green Week themed roundtable. The roundtable, hosted by Pro Carton, examined how the Deal is impacting the packaging industry and the role of fibre-based packaging in the pursuit of a circular economy. All participants agreed that consumer participation is the most important element for the packaging industry to achieve the guidelines set out by the European Green Deal.

According to Winfried Muehling, “The consumer needs to have a credible, easy-to-understand system in place when it comes to recycling because if they don’t understand it, they will not do what we need them to do… if you make it too complex the whole thing will fail in the long run.” Hockl agreed that “consumer participation is 100% key to success, and to further increase the already high recycling rates”, while Romenska added, “Consumers need to be motivated to believe that their efforts are contributing to environmental impact in general.”

The debate also highlighted the importance of the development of recycling collection systems at national, regional and local level. According to Tiina Pursula, ‘what is key is access to separate collection of all packaging…that is the only thing that allows recycling to happen and also be economically viable,” while Hockl believes systems need to be consistent and understood across each member state. “Over the past two years many countries have applied many different rules which makes the EU Green deal not visible and reachable for everybody,” he said.

In May, the EU Commission presented details of its Packaging Waste Regulations, which aim to introduce a harmonised solution. According to Romenska, this is a very ambitious target as it’s difficult to collect packaging in the same way in different countries. She also cited the significant investment required to implement changes in collection and sorting systems. While suggesting it might not be realistic, Muehling confirmed that a harmonised solution would be desirable – “even just being able to separate fibre-based packaging from other waste would be a fundamental benefit.”

While there may be a number of challenges when it comes to reaching the targets for the deal, it may also offer a boost for the packaging industry, presenting new opportunities too. According to Pursula, there will be a lot of opportunities to create products that are truly circular as well as further improve the fibre recycling system.” Romenska cited initiatives in various countries, such as Malta, where the Internet of Things (IoT) is being used to sort containers, “so innovations in digitalisation are another perspective.”

In addition to simplicity for consumers, functionality and food safety were also deemed important considerations for the industry when looking at how the guidelines must be implemented. For some, such as Stora Enso’s Pursula, functionality is the starting point; it is there to protect the product, so the materials used need to be adapted to its end-use. Hockl agreed, saying “food safety is mandatory. It’s important for the industry’s credibility to bring packaging to market – and to the consumer – which is best for its application and purpose.”

While in some instances, plastic may be a suitable packaging material to protect products, throughout the discussion, the environmental credentials of cartonboard as a means to help reach the EU Green deal targets were repeatedly emphasised. According to Muehling, “one of the biggest challenges that a brand owner faces today is to make sure they put products on the shelves that will not have a negative impact on the environment. One of the biggest risks is being attacked by consumer organisations about this.”

Carton fibres can be recycled more than 25 times with little to no loss of integrity, meaning there is no negative effect on the mechanical properties in question. With 60% of consumers considering the environmental impact of the purchasing decisions they make, this is significant, added Muehling.

Closing the discussion, Muehling stressed the importance of cross-industry collaboration: “It is not possible to solve today’s problems by yourself. It takes the involvement of all stakeholders in the value chain to meet the challenges that are in front of us. Discussing things openly and defining the best solutions is what the industry and the environment both need – and I am sure that the fibre-based packaging industry will play its part in solving the challenges that are ahead of us.”

The Pro Carton roundtable was run in association with Packaging Europe, with the publication’s editor Elisabeth Skoda moderating the discussion. Watch the full roundtable or read the Pro Carton ‘Fibre-based packaging and the pursuit of a circular economy’ report on the website today: www.procarton.com. 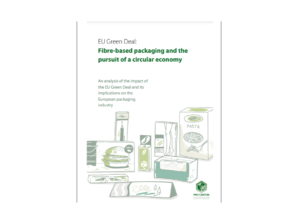